On July 5, 1973, Kingman was the site of a catastrophic BLEVE (Boiling Liquid Expanding Vapor Explosion) which killed 11 firefighters. The explosion occurred following a fire that broke out as propane was being transferred from a railroad car to a storage tank. This explosion has become a classic incident studied in fire department training programs worldwide. At the time of the incident, the Kingman Fire Department was a combination force of six career firefighters and 36 volunteers operating out of two stations. One career member was on duty in each station at all times. The equipment in service at the time of the explosion included four engines and a rescue vehicle. Station 2 was just a half-mile west of the Doxol Gas Distribution Plant, where the explosion took place.

Tank car #38214 was sitting on a spur in the hot sun that the Williams Energy Company leased from the Santa Fe Railroad. The car carried 33,000 gallons of propane gas which was to be transferred to storage tanks 75 yards away. This was at the Doxol Gas Western Energy Co. bulk plant (2512 East Highway 66), in the Hilltop business district on Kingman's southeast side. Employees of the Williams Energy Company began opening the tank car's valves to transfer its load into smaller storage tanks in the company yard. A leak was detected in one of the fittings and an attempt was made to correct it by striking the fitting with a large wrench. The gas ignited and turned the tank car into a huge blowtorch that engulfed the two men. Flames shot between 70 and 80 feet into the air. 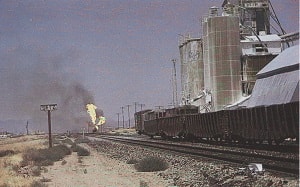 Kingman Firefighters received the first call for help at 1:57 pm and arrived on the scene three minutes later. Knowing that they were not properly equipped to extinguish the fire, they attempted to keep the tank cool to avoid an explosion. Police officers from Kingman, Highway Patrol, and deputies from the Sheriff’s Office began blocking the roads in an effort to control the gathering crowd. Members of the Fire Department were working to set up unmanned nozzles to increase the amount of water flowing onto the tank.

Ten out of the 75-man Kingman Volunteer Fire Department responded to the alarm and began spraying the car with water, hoping to keep the tank car cool and to prevent a pressure buildup inside it. Water won't extinguish burning propane, but the Kingman FD had no equipment which would, so all they could do was try to prevent an explosion.

It sounded like the thunderous roar of a jet airliner taking off; the tank car quieted for a second, sucked the huge column of flames down into it, swelled up and popped like a giant champagne cork. Two more times the flames vanished into the car and popped out. By this time one of the large transfer hoses was sending burning propane against the side of the tank car.

The explosion occurred approximately 20 minutes after the original call was received. Flames and debris were sent over 2000 ft. away. The two ton end cap of the tank was propelled down the railroad spur approximately .25 of a mile. The explosion left a 10 ft. deep crater were the tank once stood. Flaming propane and debris rained down on spectators and buildings in the area. Over 100 people received burns from the explosion. Eleven firefighters and one civilian died either immediately or within days of the incident. Several buildings in the immediate area were ignited by the burning propane, causing further problems to the incident. 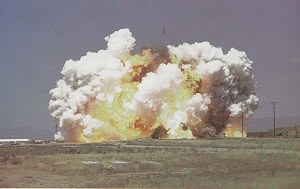 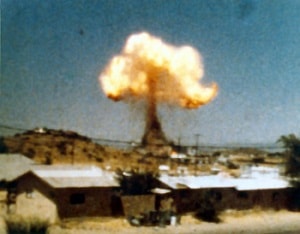 A large crowd of spectators congregated along Route 66 which separated them from the burning tank car by nothing less than two hundred yards of open desert. Kingman police and Arizona Highway patrolmen were establishing roadblocks 1,000 feet from the fire. Two minutes before two o'clock, just as an order to move people further back was given, the tank car exploded. The victims jammed the Mohave County General Hospital. Planes and helicopters flew the most severely burned victims to hospitals in Phoenix, 175 miles to the southeast, and Las Vegas, Nev., 100 miles to the northwest.

Eleven Kingman firefighters -- two career and nine volunteer -- died as a result of burns from the explosion. Three were killed instantly and eight more passed away over the following week. The fireball and radiant heat set five buildings on fire, including a tire company, restaurant, truck stop, Gas Company building, and started several brushfires. Responding mutual aid companies were assigned to extinguish the numerous fires.

The explosion literally shook this tiny town of 7,500 and was reportedly felt up to five miles away. The scene of the fire was highly visible to most of the town's residents. A radio station's news flash and the fire department's siren probably drew more spectators to the scene than would have otherwise come out of mere curiosity. Mohave County Sheriff's Office, Department of 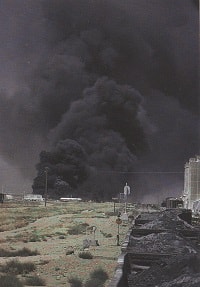 Public Safety, and Arizona Game and Fish personnel were joined by private citizens in sealing off the fire area and rerouting the massive traffic.

Mohave General Hospital received 107 casualties from the explosion by way of the one ambulance, private cars, police cars, and anything else available. Security at the hospital was to have been provided by outside personnel as well -- but many of these were themselves, being treated for injuries or worse.

Spectators and visitors gathered both outside the emergency department and inside the treatment area. Due to the severe injuries there was an executive decision made to let the loved ones be allowed inside with the patients. The hospital was an unbelievable sight. The corridors were full of burn victims, families, doctors, and nurses.

Total material damage exceeded one million dollars. Everything for three to four hundred feet from the tank car's location was black and charred. After the explosion, the fire code became an instant issue. Essentially, all the new ordinance did was require all bulk storage 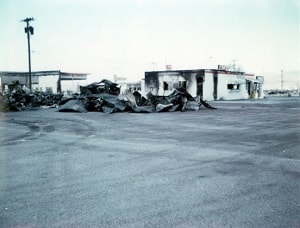 tanks to be diked and to have some kind of foam fire extinguisher system.

The ones in town that were moved were provided an area out by the airport. Spur tracks like the one the explosion happened on were to be sunk so that those cars would be in a pit. If they exploded, the pit would force the blast upward so it wouldn't cause as much damage.

As a result of the Kingman disaster, standard procedures for handling a BLEVE now became well-known in fire departments throughout the country. Films and pictures taken at the disaster are part of the training course. Ironically, a seminar had been scheduled for Kingman on July 11 (6 days after the fire), to discuss "dangerous cargo spillage." 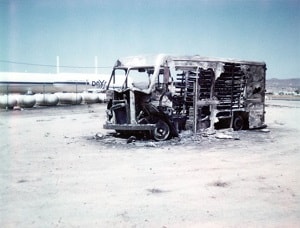 It has been many years since those 11 firefighters gave the ultimate sacrifice in a propane explosion in Kingman, AZ. In spite of the terrible loss of life, no other hazmat incident has occurred in the United States that has had more of a positive impact on the fire service than the Kingman incident. Many changes in procedures and regulations occurred across the fire service as a result of this explosion.

We owe uncounted saved lives to those brave men who gave theirs in Kingman that fateful day in July 1973.

One of the most important things we can do as firefighters is to never forget the sacrifices made by those who went before us, or the lessons we have learned from them. In particular, we should not forget those who gave the ultimate sacrifice, their lives.