At this time City Offices are Closed to the Public.  Follow this link for more COVID-19 Information.

The Kingman Fire Department traces its roots to the post World War I era, long before Kingman was incorporated. As a result of the progressive thinking of a group of young men returning from World War I, the American Legion Post #14 was formed. One of this group's main goals was to establish an organized fire department to protect the community. At a public meeting held September 22, 1921, the Mohave County Board of Supervisors approved a plan to organize a fire department. 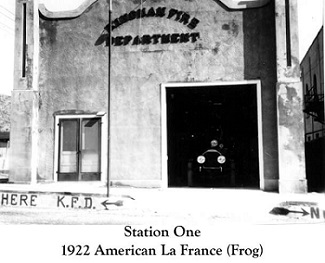 The Kingman Fire District was formed and 25 men were designated and elected to become members of the newly organized fire department. The department held its first meeting on October 6, 1921 and established an operation budget of $10,000.00. At this time, a new 1922 American La France pumper and eleven fire hydrants were ordered.

The next order of business for this busy group was building a fire station to house their new pumper. This issue was resolved when in June of 1922; a new fire station was completed at the corner of 5th Street and Beale Street. This building, as well as the 1922 American La France, is still part of our community and a living reminder of the Fire Department's beginnings.

Some years later in 1962 Kingman Fire Department built a new station up on the hill. Little did they know this would become the busiest station for the department. 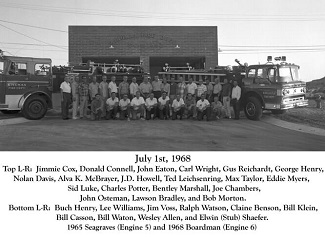 The Kingman Fire Department continued to operate as a volunteer  fire department until 1968 providing 2 on duty fire personnel, 1 at each station 24 hours a day  7 days a week.

In 1973 a devastating event occurred placing the Kingman Fire Department into history and educational books. Doxol Propane employees were in the process of off-loading a railroad tank car containing propane into two storage tanks. One of the connections was discovered to be leaking. One of the employees attempted to stop the leak. It is believed that the employee somehow generated a spark that ignited the leaking propane. An explosion occurred approximately 20 minutes after the original call was received. Flames and debris were sent over 2000 feet 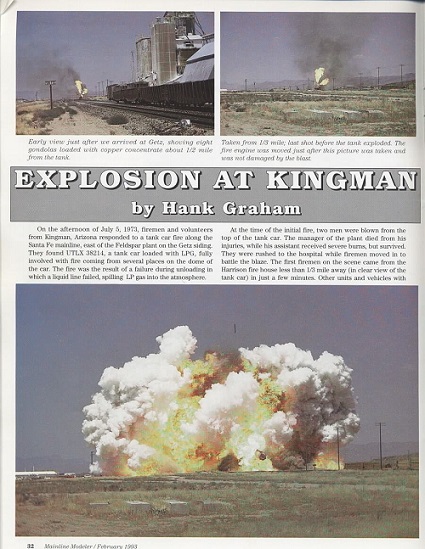 away. The 2 ton end cap of the tank was propelled down the railroad spur approximately one quarter mile. The explosion left a 10 foot deep crater were the tank once stood. Kingman Fire Department lost eleven firefighters. Two career and nine volunteers died as a result of burns from the explosion. Three were killed instantly and eight more passed away over the following week. It has been many years since those 11 firefighters gave the ultimate sacrifice in the propane explosion. In spite of the terrible loss of life, no other Hazardous Material incident has occurred in the United States that has had more of a positive impact on the fire service.

In 2016 in an effort to streamline duties and provide a better service the City of Kingman Building Department was absorbed by Kingman Fire Department and the Building and Life Safety Division was formed. Fire prevention personnel and building inspectors are cross trained in many areas with a long term goal of all inspectors being qualified and able to perform all aspects with in the division. 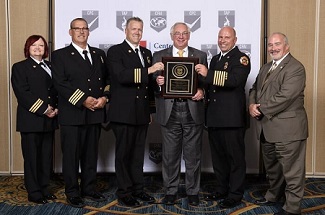 The level of professionalism and character of its members is second to none. In 2017, a comprehensive self-assessment and evaluation to examine past, current and future service levels and internal performance. After an onsite audit and going before the Commission of Fire Accreditation in a public hearing. Kingman Fire Department Achieved International Accreditation (CFAI). This achievement groups Kingman Fire Department as only one of 250 agencies in the world and the 11th in the state of Arizona. Later in the year, Kingman Fire Department was able to lower their Insurance Services Office (ISO) rating from Class 4 to a Class 1 which is the best possible class. Currently, there are only 70 fire departments in the world who are CFAI and ISO Class 1.

The Kingman Fire Department has grown since its inception in 1921. Currently, The Kingman Fire Department operates out of four fire stations with a minimum of 3 personnel on each engine. A Fire Captain, Fire Engineer and a Firefighter with at least one of those members certified at the Paramedic level. All operational members are certified at a minimum of Emergency Medical Technician- Basic. As staffing allows a Paramedic Squad unit is in service operating during the busiest times out of our most central station providing faster emergency response to our citizens.